As Women’s History Month begins, I find myself wishing I’d planned a series of blog posts about amazing women in history (similar to my daily posts for horror movies in October); unfortunately, however, I only thought of this today and this month is looking to be a beast, so that won’t be happening. I’m going to try to post more than once this month, but I can make no promises! 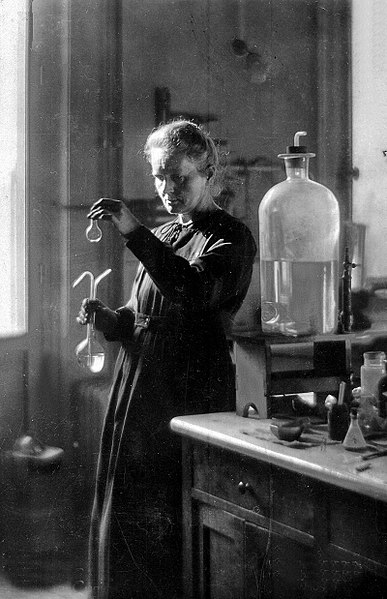 I wanted to begin with Marie Curie. Really, this post is not about her specifically but is more about what she represents. My dissertation (No Longer Estranged: Women, Science, Science Fiction) explored the relationship between feminist science fiction and feminist science studies, and, as part of my research, I was interested in how people think of women in science and what female scientists people know about and think of immediately. The answer essentially boiled down to Marie Curie. A few people could list other female scientists (Jane Goodall sometimes comes up, for instance, or Rachel Carson), but for far too many people, their list of female scientists begins and ends with this one woman.

This has happened many times. Just recently, I was discussing gender in STEM with my Technical Communications students and they repeated this pattern yet again, failing at naming any other female scientist beyond Marie Curie.

Don’t get me wrong – Marie Curie is an amazing figure and I’m glad people know of her and that she gets the credit she does. I hope, however, that we can get past the one token woman in science model and learn to appreciate all the women in science (past and present).

In case I don’t get a chance to write about them later this month, here are a few personal favorites:

For further reading, I’d highly recommend Rachel Ignotofsky’s Women in Science: 50 Fearless Pioneers Who Changed the World for readers of all ages as an introduction to women doing science across history and across a range of fields. Reading this book, I learned about women I’d never heard of before, and it has lovely illustrations to boot. And Julie Des Jardins’ The Madame Curie Complex: The Hidden History of Women in Science provides a more analytical approach to the topic, providing more depth (but fewer illustrations) than Ignotofsky’s book.

For a while now, people have made comparisons between Donald Trump and Andrew Jackson. This New Republic piece covers some major similarities and this Atlantic piece considers such similarities as well as some significant differences between the two men. In my reading this evening, I discovered another intriguing cultural comparison, though.

I’ve been reading David Oshinsky’s Bellevue: Three Centuries of Medicine and Mayhem at America’s Most Storied Hospital, and in Chapter 4, Oshinsky discusses the development of Bellevue as a teaching hospital and medical school. This history, which takes place in the early- to mid-19th century, includes a brief movement to include homeopathy in the hospital, as an alternative to purging and bleeding. This movement was stopped by a combination of the more traditional doctors’ desire to protect the hospital’s teaching reputation and a simultaneous move in their practice away from those bleeding and purging methods and toward other (non-homeopathic) methods.

The connection between this history and the Trump/Jackson comparison arises with Samuel Thomson and his approach to medicine. Thomson, who has been called “the Father of American Herbalism,” was a self-taught doctor of the early 1800s. He believed that most ailments could be treated with local (as in North American) plants, his slogan was “Heat is Life; Cold is Death,” and his treatments involved spicy peppers and other plants. He also claimed that medicine should come from “experience, not reading.”

Oshinsky’s description of Thomson’s approach and its growth in popularity highlights the connections between Jackson’s time and where we find ourselves now:

“Thomsonianism” took root in the expanding democratic culture of Jacksonian America, with its suspicion of entrenched elites. Many state legislatures in this era abolished all restrictions on who could become a doctor or a lawyer in order to discourage “monopolies.” Thomson insisted that ordinary people, using common sense, could effectively heal themselves. His goal, he stressed, was “to make every man his own physician.”

The suspicion of entrenched elites and of government power sounds very much like the rhetoric coming from Trump’s corner. This suspicion doesn’t begin with Trump, of course, but has been growing for a while. And it doesn’t only play a role in national politics and elections; it also appears in the growing turn to homeopathy and the anti-vaxxer movement. What is more reflective of “suspicion of entrenched elites,” including suspicion of trained doctors and scientists, than a movement that says a parent knows better than the entire scientific and medical establishment about what’s in vaccines, what harm they might cause, and where diseases come from? “Every man his own physician” indeed.

Unfortunately, it doesn’t look like these contemporary movements will be as easy to stop as the homeopathic movement to gain a foothold at Bellevue was in the 1840s. And there will be – there already are – consequences for the brand of paranoid elitism that gives power to homeopathy, anti-vaxxers, and people like Donald Trump.